We spoke with Patricia, who volunteers for Limbs 4 Life after becoming an above knee amputee following a car accident 38 years ago, about what National Amputee Awareness Week means to her. 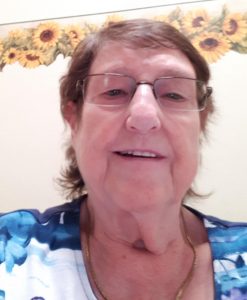 After becoming an above leg amputee, Patricia decided to share her story with other amputees to help them process the impact that becoming an amputee may have on one’s life.

At the time of the accident, it was very hard for Patricia to get her head around, she was 29, working and playing in a band, but Patricia now says, “you get used to it after 38 years; it becomes part of your normal life.”

The accident occurred in the South East of South Australia, outside of Mount Gambier, where Patricia was flown to the Royal Adelaide Hospital and completed her rehabilitation for six months before moving back home.

“I had my prosthetic legs made at OPSA, Orthotics and Prosthetics SA. After six months, I went back to Mount Gambier, resumed my job at the taxation office, continued to play and tour around country towns with the band I was in and got married. At that stage, being an amputee didn’t impact me greatly; I had people helping me.”

Patricia says the people around her supported her by picking up small tasks which would require her to do extra walking, “People at work took on duties such as going to the post office to mail letters or getting lunch if they were going out. Little things like that always help.”

During National Amputee Awareness Week, Patricia focuses on “The ability of amputees, not their disabilities. That’s the main thing I like to push.”

Before her accident, Patricia knew nothing about amputees. “When it happened, there were no support people to help me. Where nowadays there are peer support people available, other amputees, who you can talk to.”

Since the accident, Patricia has become a Peer Support Volunteer for Limbs 4 Life and the Hampstead Rehabilitation Centre. Before COVID-19, Patricia would visit patients in hospital and “talk them through the process, answer any questions they may have and try to put their mind at ease that life does go on.”

Volunteering and speaking with other amputees is important to Patricia, “When I lost my legs, there wasn’t anyone to talk to, a doctor was standing there with two legs saying you will be alright. It was terrible.”

“To talk to someone who knows exactly what it is all about makes a huge difference.”

We asked Patricia whether she believes the conversation around people with an amputee or disability is changing,

“I think the conversation is definitely changing; people are more aware, there’s more information being put out there and there are more support groups available,  not just for amputees. There is just much more information that people can get hold of now; all of that makes people aware of the disabilities and the resources that are available.”

Patricia’s advice to anyone with an amputee or disability is, “People who have not only an amputation, but any disability can still achieve many things, remain positive and focus on what you can do, not what you can’t do. I must say I have had my days, but it does get better; you have to keep at it and persevere.”